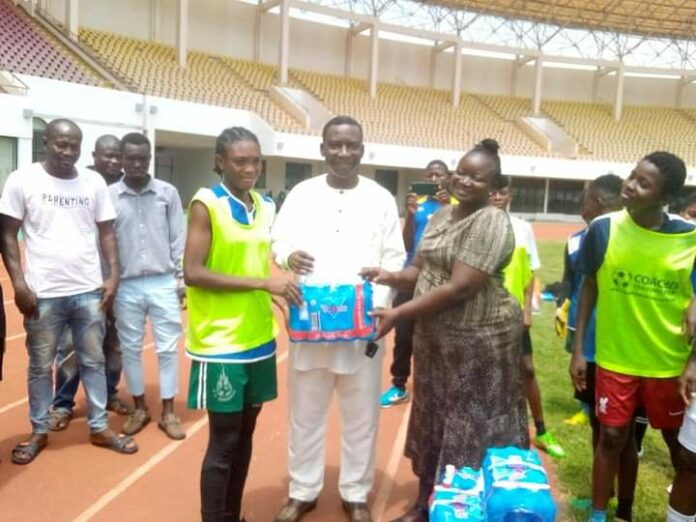 The NRFA ExCo led by it’s Chairman , Alhaji Abu Hassan Rhyzo has extended a hand of support to FC Savannah Ladies ahead of their participation in the Northern Sector Women’s League Championship.

The delegation from the RFA visited the training session of FC Savannah at the Aliu Mahama Sports Stadium and presented Ten (10) Crates of bottled mineral water and an amount of Ghc1,000 cash.

The donation was meant to motivate and ginger the ladies to give off their best so as to make the region proud.

Addressing the playing body and supporters after the donation, Alhaji Rhyzo advised the girls to be disciplined on and off the field of play if they are to chalk the needed success and gain promotion into women’s premiership.

On his part, the Supporters Chairman Mr Abdallah Red assured the NRFA ExCo that , they’ll comport themselves during games to ensure a congenial atmosphere at the stadium.
Other members of the entourage include Mr Ibrahim Kessie, Hajia Zelia, Mr A.A. Alhassan, Mr Ibrahim Dauda and Coach Alhassan Dawuo.

The Captain of FC Savannah thanked the NRFA for the gesture and promised not to disappoint the region.