The Executive Council of the Northern Regional Football Association on Thursday afternoon paid a visit to the training grounds of Tamale Real Republicans Football Club to interact with the playing body and the Technical team ahead of their journey to Accra for the KGL National Juvenile Championship. 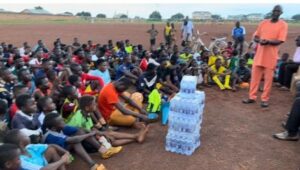 Addressing the team at their last training session before they depart for Accra, the Northern Regional Football Association Chairman, Alhaji Abu Hassan Rhyzo advised the boys to be disciplined on and off the field of play, so as to be acknowledged as worthy ambassadors of the region.
They were admonished to eschew selfishness and the attainment of individual glory, but play as a team to ensure they come out tops in their group. 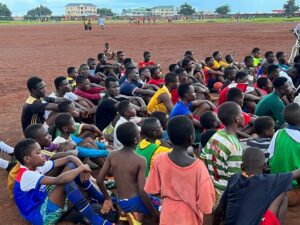 Alhaji Rhyzo challenged them to emulate the feat chalked by their seniors, several years back in the then National Milo Championship.

Republicans are on record to have represented the region on seven different occasions, winning Silver in Kumasi 1994, Bronze in Accra 1996, whilst winning Gold in Koforidua 1998 and Bolgatanga 2005 respectively.

Mr. Alhassan Yakubu Dawuo who received the package on behalf of Real Republicans, thanked the NRFA for the support and gave the assurance that, they will make the region proud.
Other members of the entourage included Alhaji Abio, Hajia Zelia, Mr. Ibrahim Dauda, Mr. Aziz Ramzy, and Mr. Abdul Gafaru Karim.

In another development, Hajia Zelia Iddi, the Chairperson of the Regional Women’s Football Committee also donated a set of jersey, 4 footballs, and stockings to motivate the team.
Notable players the team has produced include Anane Kobo, Hamza Mohammed, Mubarak Wakaso, Shilla Alhassan and Shilla Iliasu among others.