The Juvenile Committee of the Northern Regional Football Association says it is so far satisfied with clubs’ response to the ongoing registration exercise to the FIFA Connect system.

It said over 1000 clubs in Yendi and Tamale have already been registered by the Committee. 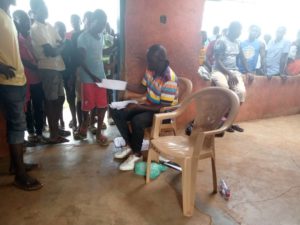 The NRFA Juvenile Committee Chairman Alhassan Yakubu Dawuo who expressed the committee’s satisfaction in an exclusive interview with the northernrfa.org said over 10,000 clubs are expected to be captured at the end of the registration exercise.

The NRFA Juvenile Committee is embarking on a massive registration drive of Under 13, 15, and 17 Juvenile players across the region.

The criteria for registering players under the various categories included age, class and weight.

He encouraged all clubs in the region with the FIFA link codes to get the relevant documentary requirements down before the Committee reached their areas to ensure speedy registration.

Mr. Dawuo however bemoaned the low numbers at the U17 category, adding the situation could be attributed to lack of organized competition for U17s in the region for the pass three years.

“U17 didn’t play any competition for 2-3 years now. So you realized that some clubs didn’t have the U17 forcing them to promote their U13 to U17 block” the NRFA Juvenile Committee Chairman revealed.