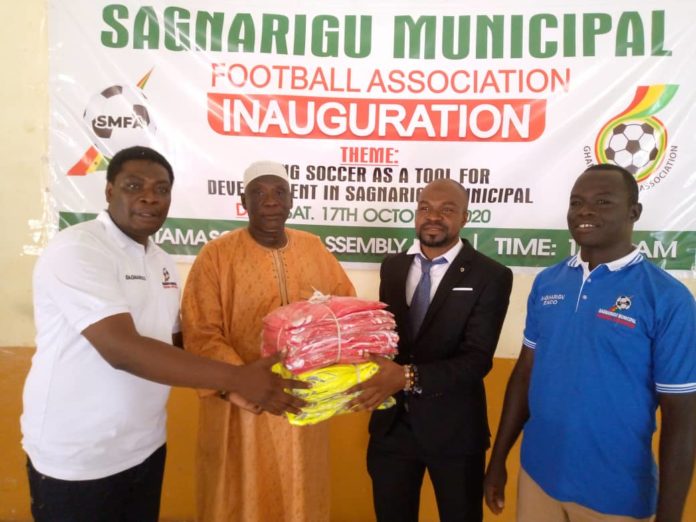 The National Democratic Congress ( NDC) Member of Parliament for Sagnarigu Constituency, Hon, A. B. A Fuseini has donated two sets of jerseys and a pledge of 2000 Ghana Cedis to the Football Association.

Alhaji Abdulai Zakaria (Alhaji Bronz), Constituency Chairman of the Party presented the items on behalf of the Member of Parliament. He said the former Deputy Northern Regional Minister will personally donate GHS 2000 to the FA when he visits the Constituency this week.

Alhaji Bronz who presented the jerseys to the SMFA Chairman, Mr. Ibrahim Dawuda, stated that the representative of the constituency in Parliament was committed to sports development because it had a positive influence on youth development.

He, therefore, entreated the Association to take their football administration seriously, adding that football has a lot of economic gains and could open a lot of opportunities for those who would take it seriously as their future career.

Chairman of the Sagnarigu Football Association, Ibrahim Dawuda, said the challenges facing grassroot football were financial constraints which makes it difficult for the management of clubs to develop talents in the Municipality.

He also indicated that lack of logistics such as jerseys, footballs, goalkeepers gloves always affect their training, stressing that some of the teams often use the same jersey throughout their matches for both home and away.

Ibrahim Dawuda however commended the MP for supporting the Association and appealed to other citizens of the land to come to their aid by supporting them with the needed football logistics to help unearth the talents of the youth in the area.