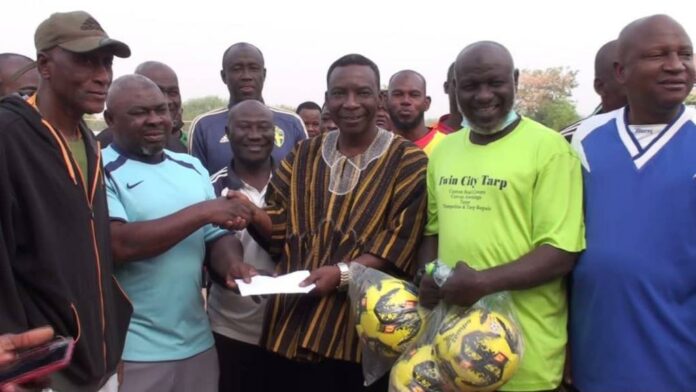 The Tamale Secondary School training grounds of the Old Players Association (PFAG) went agog with excitement when the Chairman of the Northern Regional Football Association, Alhaji Abu Hassan Rhyzo visited them on Saturday morning in the company of Mr Nurudeen Sham Una,(Exco Member) to redeem a pledge made on the floor of Congress last week.
The Old Players were billed to receive three (3) footballs and a cash sum of Ghc1,200 to support their activities.

Alhaji Rhyzo however insisted on doing the presentation to the oldies at their training grounds instead of the floor of Congress, and that was what happened yesterday at a short but colorful ceremony after their weekend training session at Tamasco, here in Tamale.
The Regional Chairman recalled with nolstagia the exploits of most of the oldies in the 60s, 70s and the 80s and assured them of the continues support of the Northern Regional Football Association whenever necessary. 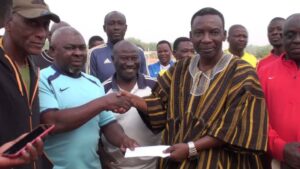 Present at the ceremony were two (2) former National Goal Kings of the elite league. Thus Mohammed Choo (1978 & 1982) as well as Anane Kwasi Kobo (1984).
On behalf of the Old Players, Alhaji Alhassan Mandugu praised the regional chairman and his Exco for their benevolent gesture and promised the group will utilize same for the benefit of all members.

He also hailed Alhaji Rhyzo who incidentally is a member of the old players group for the support they have been receiving from him over the years in his individual capacity and prayed that the Almighty Allah will continue to protect and bless him. 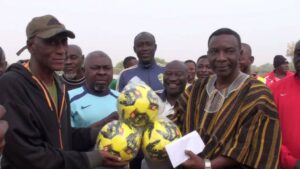